We are not going to lie to you, 16.5 is probably one of the hardest workout you will ever do– and that’s exactly why you should do it Saturday. This WOD will challenge you just as much, if not more, mentally than physically. This is what you have been training for.

Please arrive before class starts at 9. Rather than running heats we will run things in an “up next order.” So be ready to start the WOD once a spot opens up. Please also take a moment to review the movement standards video below.

or, if doing the Open Saturday…

So 16.3 has been announced and we can all breath a sigh of relief! Well, not really but at least it’s not 20 minutes!

The 2016 Open has officially started! I wanted to take a moment to congratulate everyone who registered to compete this year (you have until 5 pm Monday to register). My hat is off to those of you who are participating for the first time, because I know what it’s like to feel like you’ve been thrown into the deep end of the pool and you have no idea what to expect. But I also must commend those of you who have registered in previous Opens because you know what’s in that deep end of the pool.

Regardless of your level of CrossFit experience or your physical ability, it is important to remember that the Open exists to test your limits and push you a little more than you are used to. It is not, even with a scaled division, there to be easy or allow you rack up a bunch of reps. There is a definite possibility that you will face a movement in the Open that will bring your WOD to a grinding halt. There maybe a WOD where you are only able to perform one rep. I have experience both of those scenarios and it’s okay! This doesn’t mean that you didn’t try hard enough, or that you aren’t getting fit, it just means that you have areas in your fitness that have room for improvement. These areas might be several years in the making.

The important thing to focus on is what you can do, the movements you can perform even if it’s one rep at a time. Focus on what you can control– your attitude and your effort. As long as you go into each workout knowing that you are going to RX your attitude and effort, it doesn’t matter what your score is or how well you rank. 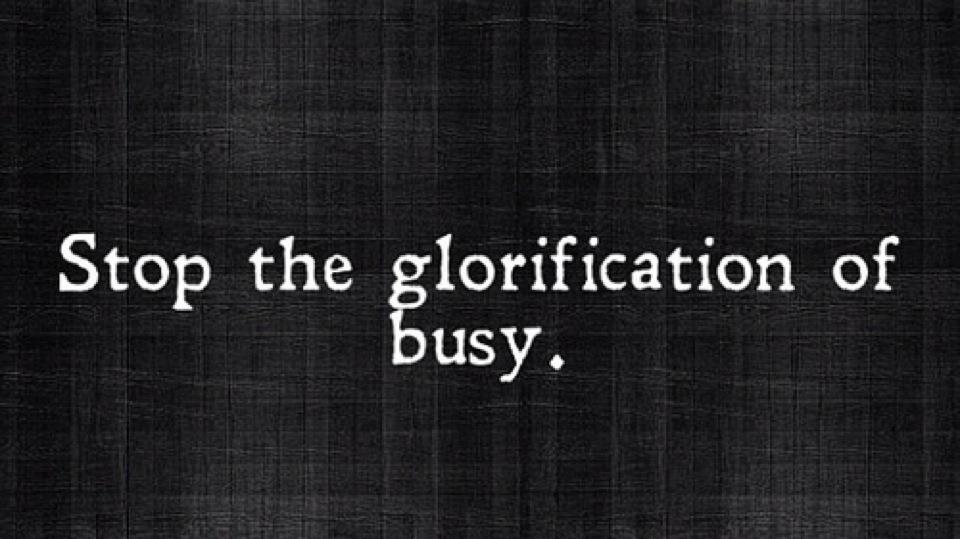 I saw this as a bumper sticker the other day and the sentiment of it stuck with me. I see this mentality everywhere on social media (and have been guilty of buying into it myself). This idea that we are somehow more successful because we have scheduled and committed every free hour we have to working/meetings/planning committees. When’s the last time you did nothing? Or at least something that was fun and not (necessarily) productive?

I could go on, but instead, I’m going to post this link to an article about the benefits of “me/down time” and go hang out and play with my daughter.

Let’s Stop the Glorification of Busy

Our two main metrics for success are money and power, and they drive us to work longer hours, sleep with our phones and tablets, miss important moments with our families and impacts our health. Arianna proposes a third metric for success: thriving. When you thrive, you take care of your health, get enough sleep and do not live to work.

Here are 10 tips from Arianna and Thrive for creating a life of well-being, wisdom and wonder:

1. Redefine success. There’s no prize for working the most hours per week or making the most money. At the end of our lives, we’re all about the same amount of dust, so the question is how much joy you’ve brought into people’s lives and how much have you made the world a better place.

2. Avoid burnout. Burnout, stress and depression are worldwide problems. At Arianna’s Third Metric conference in 2013, she learned that burnout is not only affecting Americans but also workers in Germany, the United Kingdom, China and the rest of the world. Working harder doesn’t necessarily mean better results — in fact it can have the exact opposite effect.

3. Nurture your well-being. Make time to take care of yourself in terms of exercise, meditation, music, art and family life — this isn’t selfishness, it’s good sense. My escape valve is hockey. I play hockey four to five times a week. I also ride a stationary bike and do some yoga four times a week. And I’m not sure all this is enough!

Today’s workout is like a max effort chipper. You are going to go hard for as many reps of each movement as possible in one minute. Once you are done with that movement, on to the next one. Most of these moves are pretty straight forward, but something like the inverted burpee might be new to you. Don’t worry if you cannot do what is being demonstrated in these videos, or at the prescribed weight or height, we will scale accordingly. The most important thing is that you show up! 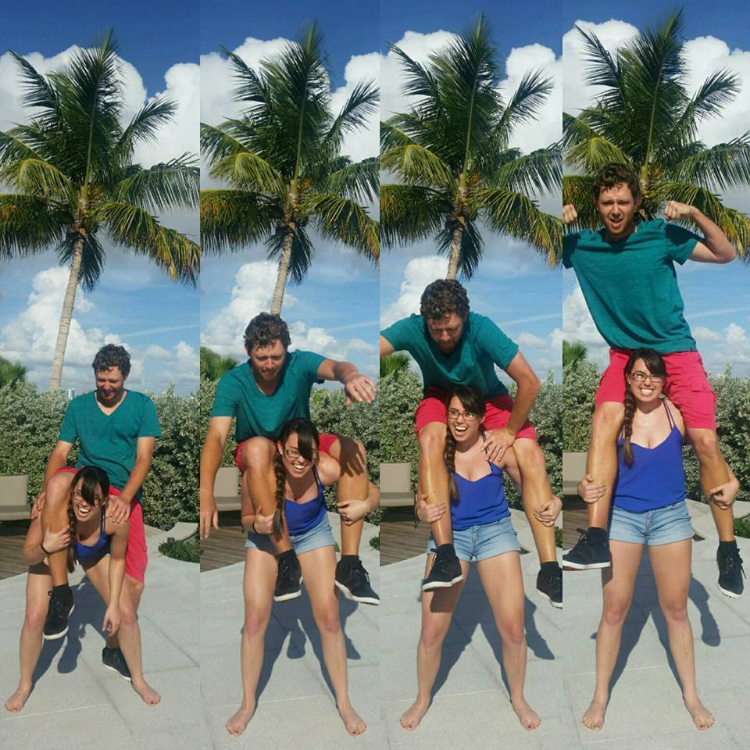 My CrossFit experience began similarly to many of yours, I’d imagine. In August 2014, I went to Colorado to visit family and was begrudgingly talked into climbing the Manitou Springs Incline. If you haven’t heard of it, I’d recommend Googling it. Basically it’s an old railroad track that’s carved out of a mountain and climbs 2000 feet in elevation from top to bottom in less than a mile and people climb it all the time- for fun. I completed it, but not without many near death moments gasping for breath, spitting sassy one liners and throwing around general attitude. I must say it wasn’t a graceful finish at all. But in that moment, I realized that I didn’t want to be the person that griped and complained whenever physical activity was suggested. The following month, I Googled CrossFit gyms in my area and found CF SAC. I walked out of my intro a few days later and vowed to never return because who, in their right mind, would ever come back for seconds of that? After whining about it to my now ex-boyfriend, he made a comment about how I never finish anything I start. And that was the beginning. Give me a reason to prove you wrong and I will.

I signed up for the next intro series, showed up and took my punishment and made three rules that I lived and died by. One, I would come 3 times a week every single week for 3 months with the goal of cutting my intro time in half at my retest. Two, if I saw a workout on the blog and thought, “Meh, I don’t want to do that one”, or “Huh, that looks terrifying” then you bet your bottom dollar I made sure to be in class those days. Strangely enough, and I’m sure many of the newbies are probably feeling this, those thoughts for sure happened darn near every day in the beginning. It gets better, things get less scary. Three, no matter what, I’d show up with a smile on my face with effort to put forth. No. Matter. What.

Three months passed, following those rules and I did, in fact, cut my intro in half (plus a few seconds, but who’s counting? Well, me, I’m counting, because PR!!!). I’m not saying it was easy. I’m honestly telling you that I wanted to stop so many times, give up, throw in the towel and revert back to my bump-on-a-log lifestyle but accomplishing that singular goal pretty much solidified what I’m doing here and I’ve held onto that feeling every day since.

I’ve tweaked my “rules” just a smidgen in the last year and a half to become goals, but the core is still there- show up, work on the skills that terrify, torment and elude me and keep a smile on my face and effort in my heart. Fast forward to where I’m at now and I can’t believe how far I’ve come and it’s daunting, at times, to know how much further I want to go in my training. I can’t throw enough love and props to the coaches for calling me on being a baby at times, telling me to add weight to the bar, or high fiving and making me laugh when I get frustrated. I’ve noticed how CrossFit has become my outlet for stress, the constant I can count on to kick my butt when I need an ego check and a solid victory when I just need a win in life. It’s become the place I feel most at home and I’m no longer the person who gripes about physical activity- I’m the one dragging people to do new things and get outside their comfort zone. I get a sick satisfaction when people ask me what I do for fun and I tell them about this stuff.

For the new people just joining this community, embrace every wild aspect of it. I’ve made some of the best friends I’ve ever known through this beautiful insanity because there is a binding force between people who legitimately want to better themselves every single day and an even stronger pull among those who choose to do it through CrossFit. For those veterans of SAC, don’t forget to shake a newbie’s hand because we were all there once and a million thank you’s for accepting my wild eccentricities, horrible jokes and general sass with open arms. 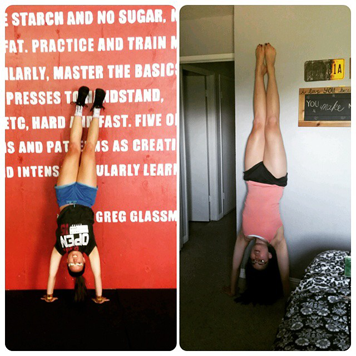 Heading into 2016, I’m planning on participating in my second Open (everyone better do it with me), dialing in my nutrition to further the benefit of all the time I spend in the gym, meeting any new, terrified face that comes through our doors and working on being better every single day.

Here’s to finally linking double unders and getting pullups. Bring it, 2016. Cheers.